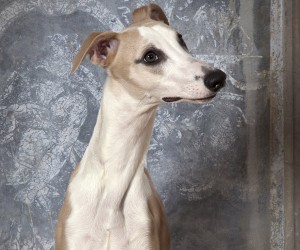 Background Man has used dogs to help him hunt since time immemorial and different types of hounds have evolved to deal with the various quarries. Larger, heavier hounds would have been needed to deal with wolves and wild boar, but in areas where small deer, rabbit or hare were hunted, the speedier, more agile Greyhound type would have been more suitable. The more enclosed area meant that a smaller hound would have been preferred over the Greyhound. Toward the end of the eighteenth century, the medium-sized running dog appears to have acquired a name of its own - the "whippet" or "snap dog" - and was a popular breed among the working men in the north of the country. These dogs were used for rabbit coursing and later for racing to the rag. Whippets became known as "the poor man’s Greyhound" and were highly prized possessions, living curled up by the fire and, it is said, often fed better than members of the family. They were expected to earn their keep at race meetings where betting took place, so a dog that lacked speed would not be considered of any value. Only the best bitches would be bred from, and only the fastest dogs used at stud, so, once more, the Greyhound type of animal dominated and the Whippet quickly reverted to type.

Average Lifespan When considering a dog, please realise that you are taking it on for its lifetime. Whippets live to 12 – 14 years of age.

Breed Personality/Characteristics/Temperament Whippets have a very even temperament and make an ideal companion. Unlike some other breeds, the males are as easy to housebreak, and no more aggressive than bitches. Both sexes make excellent pets. Males tend to be slightly more loyal and enjoy repetitive play. Females can be a little more complex, aloof and strong-willed, but are equally devoted to their owners. When viewing a litter go along with an open mind.

Compatibility with other pets The vast majority of Whippets are not aggressive towards other dogs. Like most animals blessed with great speed, they prefer to use their speed to get out of a fight - and in fact tend to avoid other dogs.

Care Requirements Whippets are much tougher than they look and will happily go for a walk in weather that would deter most owners. Being high on the leg, they bring in relatively little dirt after an energetic walk, and their short coats require only a minimum of grooming to keep in trim. Whippets have been described as the lazy man’s dog, which is true in that they are an easy breed to look after and to feed. They do need daily exercise, though not the amounts that many prospective owners fear. Like most dogs, a thirty minute walk daily on a lead will keep them healthy and reasonably fit, but having an in-built need to run, they will also appreciate fifteen minutes free running where they can really stretch out. Most Whippets, when let off the lead in a field or park, will chase around and around, to let off steam, coming back very pleased with themselves and quite ready to settle down in front of the fire. A piece of fur on the end of a string and swung from a long pole provides incentive for lots of chasing and running.

Please Take Note Although in many breeds it is considered that bitches make better house pets than dogs this is not necessarily the case with Whippets.

In Conclusion Now you know a little about the Whippet and have decided this is the dog for you or you want more information, make contact with the breed club or your State controlling body for purebred dogs. They will be able to give you information about available puppies and also suggest dog shows where you can see the breed and speak to breeders. In this way you will gain a better perspective of the breed and its needs.