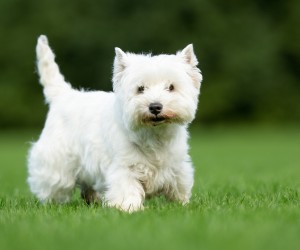 About the West Highland White Terrier

Background The West Highland White Terrier or "Westie" as they are affectionately known, is a member of the small group of Scottish National Breeds which includes the Scottish Terrier and also the Cairn, from which the "Westie" originated. Until the early years of the 19th Century Terriers tended to be dark in colour. It was not unknown for hunters to mistake a brown terrier for a fox and shoot it by mistake. This is exactly what happened early in the 19th century when Col Malcolm of Poltalloch shot one of his favourite brown terriers and after this tragic accident started keeping the lightest coloured puppies in his litters. These white terriers were used to control vermin, including foxes and hares. Early names for the breed were Poltalloch, Roseneath and White Scottish Terrier. They became known as the West Highland White Terrier in the first decade of the 20th century.

Breed Personality/Characteristics/Temperament Westies possess the classic terrier temperament; they are active, alert, game and full of self importance. They are not a dog that needs pampering, this hardy breed enjoys scampering in all weathers and will follow its owners just about anywhere. They are extremely faithful but do have a stubborn streak, early training is therefore essential. Barking is a natural behaviour for Terrier Breeds and the Westie is no exception. Of course not all dogs vocalise to the same degree. Generally Westies bark only when they must but when they do they make themselves heard.

Compatibility with other pets The Westie is not an aggressive dog but being a terrier will always be prepared to "stand his ground". They were bred to hunt in packs and as such usually run happily with other dogs that show no aggression towards them. Westies also live happily with other household pets especially when introduced as a puppy.

Care Requirements This is a no wash-and-wear dog. Show dogs are trimmed by hand, plucking the coat with finger and thumb. Westies as pets need to be trimmed by a groomer at regular intervals (usually every 3-4 months) to keep their dogs looking presentable. Owners must keep up the combing and brushing, preferably daily, between visits. This brushing removes any dead hair and helps keep the coat clean.

Please Take Note Unlike most other breeds, Westies do not moult in the normal way i.e. they do not shed hair and therefore some asthma sufferers are able to live with a Westie when they have been unable to tolerate other breeds. As the Westie was bred to be an earth dog it can be a great digger if not taught at an early age that they must not dig in your favourite flower bed.

Ideal Owner/s The Westie makes an ideal family pet as they are a people-pleasing dog and a great lover of human company. The Westie has a built-in sense of fun and adventure and enjoys exercise, whether it be a long country hike or a shorter trot around the block. Westies are extremely good with children and an ideal companion for any individual or the family as a whole and is suited to either town or country living.

In Conclusion Now you know a little about the West Highland White Terrier and have decided this is the dog for you or you want more information, make contact with the breed club or your State controlling body for purebred dogs. They will be able to give you information about available puppies and also suggest dog shows where you can see the breed and speak to breeders. In this way you will gain a better perspective of the breed and its needs.