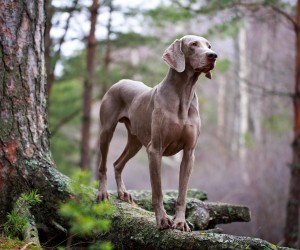 Background There have been numerous theories cited over the origins of the Weimaraner. One fact remains certain, that the Weimaraner had much Leithund blood in it. These dogs were kept during the first third of the 19th century at the Court of Weimar. Towards the middle of the century, before the beginning of our pure breed, the dogs were found almost exclusively in the hands of professional hunters and forest officials in central Germany, especially in the regions of Wiemar and Thuringia. These dogs were usually bred only for performance, and when the days of the Leithund ended, these breeders crossed their dogs with Huhnerhund (refers to Pointers and Setters) and continued these matings further. From approximately 1890, more systematic breeding methods began and were recorded in the stud book.  In addition to the shorthaired Weimaraner, even before the turn of the century, there appeared a longhaired variety, although only now and then. The Weimaraner has remained a pure breed and basically free of crossbreeding, especially to Pointers, ever since it was first recorded in the official breed stud book. Therefore, the Weimaraner is, no doubt, the oldest German pointing breed, and has been purebred for around 100 years.  The versatile Weimaraner (nicknamed the "Grey Ghost" due to its unique colour) is a dedicated companion dog. From the early years of the breed they have lived with their people as dedicated companions and hunting dogs. In Australia both the Weimaraner (shorthaired) and the Weimaraner (longhaired) varieties are available.

Shorthaired This variety possess a short (but longer and more dense than in most comparable breeds) coat that is strong, very dense with a sleek topcoat and with or without undercoat.

Longhaired This variety has a soft, long topcoat, with or without undercoat, smooth or slightly wavy, moderate feathering.  Colour is a distinctive feature of this breed - silver, roe, deer or mouse grey with shadings in between.

Average Lifespan When considering a dog, please realise that you are taking it on for its lifetime. Weimaraner live on average to about 12 years, beyond is a bonus. The oldest known in Victoria was 18.

Breed Personality/Characteristics/Temperament Weimaraner are a breed for those who enjoy a dog that is intensely devoted and responsive to attention - "they demand attention", and will follow owners from room to room, usually lying down with body contact when owners sit down. They are wonderful with children, protective, fun loving, easy to train, and can be quite a clown. They are a keen hunting dog with remarkable scenting ability.

Care Requirements Daily free running in a park or large area (not the suburban backyard type of area) and some training to exercise their brain prevents them from becoming bored and being destructive. Grooming requirements for the breed include regular brushing with rubber grooming mitt in the short coat and a massage brush on the long coat. Both need grooming more often when losing hair. This usually occurs twice a year but can occur after a bitch has had a season. Regular bathing, cleaning of ears, trimming of toe nails and dental care are essential.

Please Take Note The decision to own a Weimaraner should be considered carefully as they require an active person with a keen interest in the companion dog and are prepared to give it the exercise, love and attention they demand. They are a dog that do not kennel well, so if this is the breed you select get the dog used to being in a kennel early in life. They do not like to be relegated to the back yard and forgotten, they like to be with you as part of the family. The couch and the bed are their favourites. Once you decide upon the breed, however, you will fast become one of the many who firmly believe that this is the most wonderful breed in the world and could never live without one.

In Conclusion Now you know a little about the Weimaraner and have decided this is the dog for you or you want more information, make contact with the breed club or your State controlling body for purebred dogs. They will be able to give you information about available puppies and also suggest dog shows where you can see the breed and speak to breeders. In this way you will gain a better perspective of the breed and its needs.