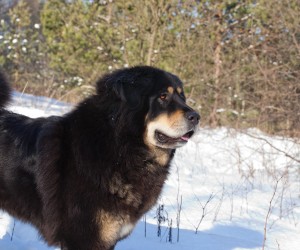 About the Tibetan Mastiff

Background The Tibetan Mastiff is not a true Mastiff in the sense of what we know of the English Mastiff. The title of mastiff was given to the dog by Western explorers who wanted to convey the appearance of a large powerful dog when describing it to others. The breed was officially designated the Tibetan Mastiff by the Kennel Club in England in 1857 and the name stuck. The Tibetan Mastiff is the largest of the Tibetan breeds and was first documented in the 12th Century by Marco Polo. The Tibetan Mastiff’s primary role was as a livestock guardian as well as guardian of the Tibetan villages and caravans, the Tibetans being a nomadic race. Often the dogs were tied up all day and released at night to roam and protect the area. In a quote from a book by Thubten Figme Norbu and Colin M. Turnbull (1968) Tibet, where they had been talking with Tibetans from a village "As small children we used to play with our dogs, wrestling with them and teasing them. Whatever we did, they would never bite. But if a caravan came and made camp nearby, we would not think of going near their dogs." As early as 1847 Queen Victoria was given a Tibetan Mastiff as a present from the Viceroy of India and later Edward VII (the then Prince of Wales) took Tibetan Mastiffs with him to England where both appeared in British shows. The Tibetan Mastiffs experience in Western countries has fluctuated over the years, almost dying out completely at times, but with the dedication of several people it has been kept alive and there are now hundreds of Tibetan Mastiffs around the world.

Average Lifespan Like all large dog breeds the life span of the Tibetan Mastiff is 10-12 years.

Breed Personality/Characteristics/Temperament Ann Rohrer and Cathy J Flamholtz (1989) The Tibetan Mastiff - Legendary Guardian of the Himalayas give a good and accurate description of the Tibetan Mastiff. "We know that the breed has a bold temperament and appears fierce to unwelcome strangers. For this reason, he has long been used as an invincible guardian for flocks and herds, the home and travelling caravans. We see, too, that the dog gives fair warning before attacking. We should not forget, however, that the Tibetan Mastiff is portrayed as a controllable dog, always responding to the commands of his owner to let a stranger approach. Those travellers who came to know the breed well describe him as gentle and loveable with his family and quite responsive to children. As we have seen, however, the breed has an independent nature and tends to be aloof with strangers. We also find a dog that generally rests during the day, but is much more active at night. Finally, we find a dog characterised by a distinct profound bark." The Tibetan Mastiff benefits from obedience training and shows extreme loyalty to its owner.

Compatibility with other pets The Tibetan Mastiff has an adoptive nature and generally accepts and gets along well with other animals. He gets on well with children. As with all dogs, young children and pets should always be supervised when together.

Care Requirements Much of the Tibetan Mastiff’s appeal is in its luxurious coat, yet it does not need hours of grooming. Referred to by some owners the Tibetan Mastiff is a "wash and wear" dog. A good brush once or twice a week should keep the coat in good condition and eliminate any doggy odours. Bathing is not essential unless you are preparing for a show or your dog has rolled in something unpleasant. They shed their undercoat mostly in spring; it comes away in large clumps. Deep combing daily at this time of the year will help with the shedding which should take about two weeks. In warmer areas a Tibetan Mastiff’s ears should be checked regularly. The reason for this is the Tibetan Mastiff has more folds than other breeds and infections can occur in humid areas.

Ideal Owner/s Anyone who has the time to exercise and train a Tibetan Mastiff is capable of owning one. Remember your Tibetan Mastiff is most active at night so he will sleep most of the day (given the chance). A strong yard is important as a Tibetan Mastiff can jump fairly high if he feels he needs to. Because the Tibetan Mastiff is a guard dog he will bark at strangers so having him sleep in the house or a secure kennel is a good idea if you don’t want to upset your neighbours. They are great family animals and get along well with children. They are willing to learn but get bored with repetition so use imagination in your games. Tibetan Mastiffs thrive on love and attention, by giving him heaps of both he will become your true friend!

In Conclusion Now you know a little about the Tibetan Mastiff and have decided this is the dog for you or you want more information, make contact with the breed club or your State controlling body for purebred dogs. They will be able to give you information about available puppies and also suggest dog shows where you can see the breed and speak to breeders. In this way you will gain a better perspective of the breed and its needs.