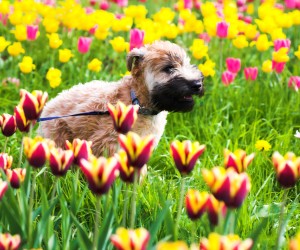 About the Soft Coated Wheaten Terrier

Background The Soft Coated Wheaten Terrier is thought to be the traditional Irish farm dog. It was the poorer folk’s dog; large enough to enforce its presence but not so large that it was expensive to keep. It was bred as an all purpose dog to herd sheep and cattle, catch a range of vermin, keep watch around farm boundaries to repel intruders and be a family companion. They were also known to accompany their master on hunting or poaching outings.  The breed gets its name from its coat which is a soft open coat, the colour of ripened wheat, that falls in waves ranging from shimmering silver to golden. Depending on taste of the owner they can be left shaggy or trimmed to a neat terrier outline. The breed is closely related to the two other breeds of long legged terriers from Ireland: the Irish Terrier and the Kerry Blue Terrier. The breed was officially recognised in Ireland on St Patrick’s Day 1937.

Average Lifespan As with most other breeds the Soft Coated Wheaten Terrier can live into the teens.

Breed Personality/Characteristics/Temperament The Soft Coated Wheaten is an elegant long legged terrier, the "teddy-bear" soft cuddly dog that is a delightful and faithful companion. They are a good family dog, orienting to the group rather than to one family member. They are generally good with children. They are sturdy and not easily injured. The Soft Coated Wheaten Terrier has a compact body being agile and strong for its size. They have straight forelegs and powerful hind legs. The ears are smallish, set at the top of the skull and drop forward. Eyes are clear, bright dark hazel and slightly almond shaped. The eyes are usually shaded by a curtain of fur that falls forward over them. It is happy and steady in temperament, carrying itself gaily with an air of self-confidence. They are an alert dog which shows interest in the environment. They are less aggressive than is encouraged in some of the other terrier breeds.

Compatibility with Other Pets Soft Coated Wheaten Terriers vary in their compatibility with cats and other household pets depending on the individual personality of the dog and their upbringing. There may be some conflict with adult dogs of the same sex however they show less dog to dog aggressiveness and are less territorial than other breeds of terriers.

Care Requirements The coat of the Soft Coated Wheaten Terrier sheds little and is a continuous growing coat. They require regular brushing and combing to remove dead hair and prevent matting. They also need to be trimmed or tidied up throughout the year.  The Soft Coated Wheaten Terrier is an active breed and needs regular exercise. A fenced yard is ideal. Daily walks are an advantage. They can be kept in apartments as long as they are regularly exercised.

Special Features The coat of the Soft Coated Wheaten Terrier is not only one of its visually attractive features but, because it sheds little, this makes the breed an ideal pet for people who suffer from respiratory problems such as asthma. In addition they normally do not have as strong an odour as many other coated breeds. Soft Coated Wheaten Terriers like to be housed indoors and treated as one of the family. They are a sociable breed. They are an intelligent breed and a number of dogs have excelled at obedience training. They can at times be stubborn and independent so, as with most other breeds, puppy socialisation followed by basic obedience training is a good idea. Soft Coated Wheaten Terriers are sensitive to noise and, whilst as a rule they are not barkers, they will announce visitors. If they bark it is best to investigate. As the name implies they are all wheaten in colour however the shade may vary. Grey shading may occur on the ears and beard. Wheaten pups are darkly coloured, frequently having black tipping. They gradually fade to the adult wheaten colour.

Ideal Owner/s Since the Soft Coated Wheaten Terrier is good with children they are an ideal family pet. They love to be with people and are a loyal companion.

In Conclusion Now you know a little about the Soft Coated Wheaten Terrier and have decided this is the dog for you or you want more information, make contact with the breed club or your State controlling body for purebred dogs. They will be able to give you information about available puppies and also suggest dog shows where you can see the breed and speak to breeders. In this way you will gain a better perspective of the breed and its needs.