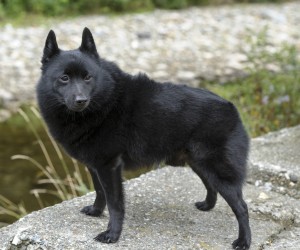 Background The Schipperke is also known as the "Belgian Barge Dog", "Little Captain" and "Little Black Devil". Originating in Belgium, Schipperke were first noted in the writings of the monk Wenceslas in the fifteenth century. In 1690 a show for Schipperke was held in Brussels - believed to be the first speciality show for any breed. In the 1800s Belgian gentlemen would craft special brass collars for their Schipperke and proudly walk their dogs through town. Schipperke also served as watchdogs and ratters on barges, keeping an eye on the cargo and befriending the horses that towed the barge. Exports to England in the late 1800s and two World Wars reduced the number of Schipperke left in Belgium. Today Schipperke can be found in England, the United States, South Africa, Australia and New Zealand, as well as Continental Europe.

Average Lifespan When considering a Schipperke, please realise you are taking it on for its lifetime. Schipperke live up to 14 years of age. A popular Australian vet stated that Schipperke were a "a very healthy dog - in fact, they have such a low incidence of inherited disease that it’s not worth discussing."

Description Schipperke are small, cobby dogs with a sharp foxy expression. Adults should weigh between 5.4 and 7.3kgs (12-16 lbs). Their eyes should be dark brown. Coats are usually black but occasionally other whole colours. The coats should be harsh and have a frill and a mane, and good culottes on the back of the thighs. Feet should be cat-like. A Schipperke can be walked several kilometres a day, but will be equally content spending a day in the backyard. Schipperke are very intelligent dogs and this needs to be considered when planning their training and housing. Schipperke don’t have a "doggy odour".

Breed Personality/Characteristics/Temperament A Schipperke should be active, intensively lively and alert, and its temperament should be amenable, intelligent and faithful. Schipperke are strongly loyal to their family and friendly to children, but are distrustful of strangers. Schipperke are extremely curious dogs, inspecting every inch of the house and objecting to anything out of order, like moved furniture. When you have got their attention their ears will be at the alert and they will twist their heads from side to side with a quizzical look. They eat swiftly, and food treats will hold their attention. They are instinctively efficient killers of rats and other vermin. Schipperke are wonderful travellers, having started with the horse and carriage and graduated to the automobile. They are great companions on long trips and holidays.

Compatibility with other pets Schipperke can co-exist with other small dogs, cats and good-natured large dogs. Training from an early age may be required to achieve this. Some larger dogs have been known to harm Schipperke, so an assessment of the nature of the large dog is required. In the absence of humans, Schipperke enjoy the company of other dogs - often other Schipperke! Pet rabbits, guinea pigs, and mice etc should be well fenced so that Schipperke cannot reach them.

Care Requirements All dogs need food at least daily, fresh water at all times, shelter, veterinary care, training and lots of love. Schipperke are low-maintenance dogs. They don’t require bathing, but may be brushed or combed occasionally. The coat is fairly short. It drops once a year (twice for intact females). Nails need regular clipping. Some Schipperke have skin allergies due to creepers such as Wandering Jew and Ivy, fleas, red meat or preservatives. Owners sometimes prepare a casserole of minced chicken, vegetables (other than onion) and pasta or rice for their dogs, which can be accompanied by a purchased dry food.

Please Take Note The Schipperke is a watchdog and will "raise the alarm" when the doorbell rings or some other disturbance occurs. A careful and gradual introduction to strangers may sometimes be required.

Ideal Owner/s Anyone who is captured by the nature and appearance of the Schipperke and who can meet its needs as described above would make a good owner. Families with primary school age children, elderly people and people with small yards may be especially attracted to the Schipperke. This observation is not intended to rule out people who don’t fit into these groups.

In Conclusion Now you know a little about the Schipperke and have decided this is the dog for you or you want more information, (even just how to pronounce its name!) make contact with the breed club or your State controlling body for purebred dogs. They will be able to give you information about available puppies and also suggest dog shows where you can see the breed and speak to breeders. In this way you will gain a better perspective of the breed and its needs.