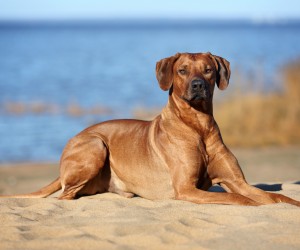 Brief History
The Rhodesian Ridgeback was developed in the Cape Colony of Southern Africa in the late 1800’s where the early pioneers’ dogs were crossed with the semi-domesticated, ridged Hottentot hunting dogs.  They used to hunt mainly in groups of two or three. The original function of the breed was to track game, particularly big cats, with great agility and keep them at bay until the hunter arrived.

The peculiarity of the breed is the ridge on the back, which is formed by the hair growing in the opposite direction to the rest of the coat.

Average Life Span
When considering a dog please realise that you are taking it on for its lifetime.

Temperament
The Rhodesian Ridgeback should be a confident, stable, self-possessed dog. They are dignified, intelligent and aloof with strangers. The Ridgeback was originally bred as a dual-purpose guard/hunting dog and the guard part means that they are not interested in, or bothered by strangers, unless they pose a threat to members of the family or the home. They are independent thinkers compared to some other breeds, so they do well with a firm but kind training to bring out the best in them.  Extreme loyalty and intelligence make the Rhodesian Ridgeback an excellent family pet.

General Breed Description
The Rhodesian Ridgeback should represent a well balanced, strong, muscular, agile and active dog. They should be capable of great endurance with a fair amount of speed and there should be no tendency towards massiveness. This is not a member of the mastiff family but of the hound (hunting) group, where the ability to travel easily over long distances is of the utmost importance.

The Ridgeback has an overall symmetry and balance that is very pleasing to the eye – this is one good looking dog!

The colour of the Rhodesian Ridgeback is considered to be wheaten and can range from light wheaten (the colour of wheat fields) through to a red wheaten. Ridgebacks come in two colours, determined by the nose leather – black nose, with associated dark eyes and ears and brown or liver nosed dogs who have amber eye colour.  The brown nosed dogs have coats often more akin to chestnut in horses.

Coat and Care Requirements
The coat sheds year-round and can be kept in good order by going over it once a week with a hound glove or curry comb.

Health
All breeds have individual health issues. When speaking to breeders it is recommended you enquire about breed’s health and what health testing the breeder does. The Rhodesian Ridgeback is generally a healthy dog. However, there are two issues that are linked directly to the presentation of the ridge. The first is that pups can be born without a ridge, and NO it can’t appear later on. These pups are exactly the same as their ridged siblings and not defective health wise but should not be used for breeding and make wonderful family pets. The other condition is more serious, as pups can be born with a neural tube defect called a “dermoid sinus”, this can be detected quite early on (within hours of birth) by reputable breeders who are aware of the condition, and should discuss it with you. Other conditions that do occur occasionally may include Hip Dysplasia & Elbow dysplasia, Bloat and Degenerative Myeolopathy (DM).

Suitability
This breed requires formal training from an early age to ensure they become an obedient family member and will require regular exercise. The Rhodesian Ridgeback Club recommends enrolling your puppy in puppy preschool so that he receives plenty of socialisation. If this is done with an obedience club it will be easy to continue training as the dog grows, which is imperative for a breed of this size. The intelligent but sometimes stubborn Rhodesian Ridgeback has a record of success in Conformation (dog show), Endurance, Lure Coursing and Tracking and they are also able to compete in obedience, rally and agility.

In Conclusion
Now you know a little more about this breed. If you have decided this is the dog for you and wish to investigate further, please contact the Breed Club or Dogs Victoria. They will be able to give you information about available puppies and also suggest dog events where you can see the breed and speak to breeders. In this way you will gain a better perspective of the breed and its needs. With any breed of dog, it is important to research and determine suitability for your lifestyle before committing to a puppy which will be a part of your family for many years to come.

Whilst many breeds are recommended for families, it is imperative that when children are with dogs they are supervised at all times. Basic obedience training is a vital part of dog ownership.

Dogs Victoria is about the responsible ownership of all dogs and in particular the preservation of pure breeds.