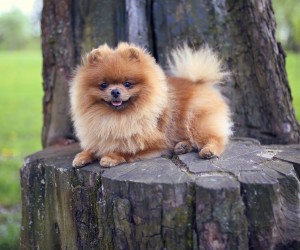 Background The Pomeranian is believed to have descended from wolf-spitz type dogs which at some early stage migrated to Pomerania from the north of Russia and Siberia. It shares common ancestry with other Arctic breeds such as the Samoyed and Keeshond. These early Spitz type dogs were used as guard and sledge animals. At this stage of development, the breed weighed around 14kg. The smallest puppies from any litter were often kept as companions - and later these smaller Spitz dogs were bred together in an effort to further reduce the size. Pomeranians were established as a breed in the eighteenth century after they attracted the interest of the English monarchy. Upon her marriage to King George III, Queen Charlotte brought large white Pomeranians to England in 1761. However it was not until Queen Victoria’s reign that the Pomeranians became one of the most popular toy breeds. The 9 - 13.6.kg dogs of Queen Charlotte’s time now weighed just 5.5kg. Queen Victoria further improved the breed after she imported smaller Pomeranians of different colours from various European countries.

Average Lifespan When considering a dog, please realise that you are taking it on for its lifetime. Pomeranians live from between 10 to 12 years of age.

Breed Personality/Characteristics/Temperament The Pomeranian makes a delightful family member, being extroverted, lively and very intelligent. This breed has not forgotten its spitz heritage and can be very loyal and protective towards its human family. Compensating for its diminutive size with extreme intelligence and incredible energy, the Pomeranian is eager to learn and excels at any type of obedience training.

Compatibility with Other Pets The Pomeranian has a friendly disposition but as with any new family pet, should be introduced carefully to any other resident companion animals.

Care Requirements The double coat of the Pomeranian does not require as much attention as some of the other coated breeds but nevertheless does require regular grooming - at least 2 or 3 times a week, if not more often. Your new puppy should be groomed from an early age so that it can learn to accept and enjoy all the attention. Best results will be obtained by using a good quality bristle brush. When you pat your Pomeranian, stroke the coat from the tail to the head, as this will help to raise the dense coat. This breed’s exercise requirements are not extensive - a daily run around the family’s garden or a short walk is sufficient to keep your Pom fit and healthy.

Please Take Note Your Pomeranian will be a member of your family for many years to come, so take great care in selecting exactly the right dog for your family.

Ideal Owner/s Owing to its diminutive size and high energy levels, the Pomeranian is not recommended for families with younger children. These little dogs are best suited to flat dwellers that are prepared to exercise them on a regular basis. Owing to their high intelligence and loyalty, Poms also make excellent companions for the elderly.

In Conclusion Now you know a little about the Pomeranian and have decided this is the dog for you or you want more information, make contact with the breed club or your State controlling body for purebred dogs. They will be able to give you information about available puppies and also suggest dog shows where you can see the breed and speak to breeders. In this way you will gain a better perspective of the breed and its needs.