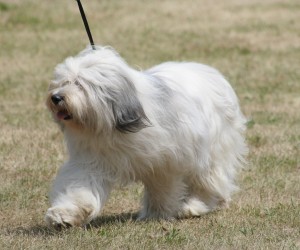 About the Polish Lowland Sheepdog

Background The first written history of the breed was about 1514 when a trading ship owned by K. Grabski left Gdansk for Scotland with grain to be exchanged for sheep. He had with him six Lowland Sheepdogs. Three were traded for a ram and ewe with a Scottish shepherd. The records show that medium size shaggy coated herding dogs existed for centuries in Poland, mostly in Eastern and Northen parts. At the beginning of the 20th century the breed type as we know it today began to emerge. All this work was destroyed in World War II. Attempts to rescue the breed began in 1948, and in 1957 the first Polish Lowland Sheepdogs were shown, and in 1989 the first one was brought to Australia.

Average Lifespan They have an average lifespan of about 12 years.

Breed Personality/Characteristics/Temperament The Polish Lowland Sheepdog is a medium size shaggy dog, loyal family friend and guard, but suspicious of strangers. They are very intelligent, and need a firm hand from early puppyhood. They are a challenging obedience dog.

Compatibility with other pets They get on well with other animals, but will tend to "herd" newcomers.

Care Requirements With such a profuse coat, they do need regular grooming. They must be groomed out completely before bathing or the coat will felt. Most pet owners keep the coat clipped off to about 1-2 inches long, but keeping the head fringe to protect the eyes. Ears must be kept free of hair and dirt, as with their drop ears they can tend to become infected. They do not cope well with a high protein diet. Please note - they love their food, and don’t know when to stop, thus making it possible to easily have them overweight.

Ideal Owner/s They suit all types. In Poland they are kept as guard dogs in apartments. They are a "people" dog, and do not like to be locked in a backyard on their own. If you don’t like a shadow, this breed is not for you.

In Conclusion Now you know a little about the Polish Lowland Sheepdog and have decided this is the dog for you or you want more information, make contact with the breed club or your State controlling body for purebred dogs. They will be able to give you information about available puppies and also suggest dog shows where you can see the breed and speak to breeders. In this way you will gain a better perspective of the breed and its needs.