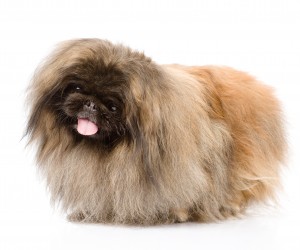 Background. The Pekingese first arrived in China during the Shang Dynasty. Due to no known records to say for sure, we can only assume these dogs have been around since before 400 B.C.E. Pekingese were the companions of the Chinese nobility, they are one of the oldest dog breeds and could only be owned by Royalty. In 1860, British and French forces occupied the Forbidden City, the ancient palace of the Chinese Emperor as a result of the Opium Wars. Several of the Royal Family decided to commit suicide rather than face capture. British forces discovered five Pekingese in the robes of these attendants when they were looting the palace. These five dogs were taken back to England, where they formed the basis of the modern Pekingese breed. After the first five dogs, a very small number of other Pekingese made their way out of China over the next several decades, and were added to the small but growing breeding pool already present in the West, and from there the breeding of the Pekingese started again.  In 1898, a standard of points was written up for the Pekingese, and the Pekingese Club of England was founded approximately 6 years later. In modern day this breed continues to have a large number of admirers, who are incredibly dedicated to this unique and ancient breed.

Average Lifespan. The average lifespan for Pekingese who lead a healthy and active life is about 10 to 17 years. When you consider a Pekingese it is to be remembered that they will become loyal to their master till death do us part.

Breed Personality/Characteristics/Temperament. The Pekingese’s flat face and large eyes are some of the breed’s most obvious characteristics. The body is low to the ground and compact. Their weight is 3.2 to 6.4 kg and they stand about 6-9 inches at the withers, they can be smaller and if they are under 3.2 kg they are often referred to as sleeve Pekingese. The name sleeve Pekingese comes from the old days when emperors would carry the small Pekingese in their sleeves. The Pekingese seems to be aware that it is a dog of royal ancestry. These are very alert little watch dogs and will sound an alarm bark much bigger than their size. Pekingese love attention and cuddles. They are great family dogs and are good with children, so long as a child is not rough with them, as with any dog, children should be supervised until they know how to treat dogs gently. Pekingese are generally good with other dogs and pets, but should be socialised early and thoroughly to accept many people. Pekingese are devoted to their family, are quiet smart, but training requires patience as with many breeds.

Care Requirements. Pekingese will need brushing a few times a week if kept in full coat. It is important to remove foreign materials from their eyes daily, and the creases on the face to prevent sores, also the fur in the buttocks of the Pekingese must be kept maintained, clean and well-groomed. Toe Nails need to be clipped every 4 weeks. Due to abundance of fur, it is important to keep Pekingese cool. The breed is prone to have heatstroke when exposed to high temperatures for a long time. Companion Pekingese, can be clipped back to an inch all over, which makes grooming easy. They are house dogs, will learn to use a doggie door to go outside for toilet. You will find they prefer to be inside with the family.

Conclusion. Now you know a little about the Royal Dog from China "The Pekingese" and have decided this is the dog for you or you want more information, make contact with the Pekingese Specialist Breed Club or your State controlling body for purebred dogs. They will be able to give you information about available puppies and also suggest dog shows where you can see the breed and speak to breeders. In this way you will gain a better perspective of the breed and its needs.