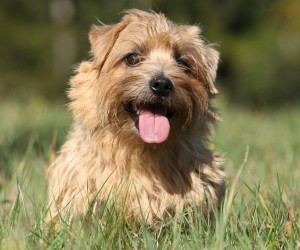 About the Norfolk Terrier

Background About the middle of the 19th century a man known as "Doggy" Lawrence was breeding small red terriers (about 10 pounds in weight) which he sold mainly to Cambridge undergraduates. It is believed these dogs were the foundation of what are now known as Norwich and Norfolk Terriers. Norwich Terriers, drop and prick-eared were officially recognised by the English Kennel Club in 1932. Following later disagreements, several representations made to separate the breed officially into two varieties were refused, but a suggestion to form two separate breeds was agreed by the club, with the prick-ears to be Norwich Terriers, whilst the drop-ears would form the new breed to be known as Norfolk Terriers.

Average Lifespan When considering a dog, please realise that you are taking it on for its lifetime. Norfolk Terriers live until 12 to 15 years of age.

Breed Personality/Characteristics/Temperament The Norfolk Terrier is one of the smallest of the terrier group; of a loveable disposition, not quarrelsome, and with a strong constitution. They are appealing, easily portable and cheap to feed. Active, with its origin as a working terrier, these breeds do require exercise. A ratter par excellence and willing to go to ground, they can sublimate these primordial drives into bright, eager companionship that is never dull or boring. As a watchdog the Norfolk Terrier will always let you know if someone approaches your home. However, they are not a guard dog as friendliness is a dominant characteristic.

Compatibility With Other Pets As a companion it is to be encouraged that the Norfolk familiarise with other household pets early. As with all terriers it is a pack dog and will live happily with other animals.

Care Requirements The coat is hard, wiry and straight, lying close to the body with ruff on the neck. Head, ears and muzzle should be short and smooth with slight eyebrows and whiskers. Weather resistant coats are generally maintained by tidying with fingers, brush and comb. Norfolk are busy, inquisitive little dogs, they adore walks and thrive on exercise. Special care should be taken with the dog living in town ensuring that the dog is on a lead when leaving the garden, which must be secure.

Ideal Owner/s The breed is suitable for families, for young and old alike for small or large yards. The Norfolk Terrier is a fine family dog, a real presence in the house, and long lived.

In Conclusion Now you know a little about the Norfolk Terrier and have decided this is the dog for you or you want more information, make contact with the breed club or your State controlling body for purebred dogs. They will be able to give you information about available puppies and also suggest dog shows where you can see the breed and speak to breeders. In this way you will gain a better perspective of the breed and its needs.