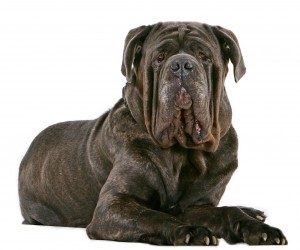 About the Neapolitan Mastiff

Background This breed has its origins in Italy, where it was originally bred as a gladiator dog and guardian. In ancient Rome, dogs were bred to serve the great Roman armies. Throughout history these dogs have remained sought after for their strength and size and were often used as fighting dogs. Despite centuries of popularity throughout Europe, this type of dog was almost lost after World War II. Although the breed’s background is widely associated with fighting and war, the modern Neapolitan Mastiff is far removed from these origins. They are heavy boned and thickset with a big broad head. The most distinguishing feature of the dog is its very loose skin, particularly around the head. The skin forms numerous dewlaps (folds) from which saliva will drip. An interesting characteristic is the way the dog moves. Some owners liken it to a big cat, slow but fluid. The movement is due to the connective tissue gene that causes the loose skin. The gene causes the joints to be looser.

Breed Personality/Characteristics/Temperament Despite their size, Neapolitan Mastiffs are calm and placid in nature. They are better described as a gentle giant; however Neapolitans are strong willed and will not respond to harsh treatment. They will learn respect through good training and a stern voice. Neapolitans are very easy going and fairly even tempered. They are described as loyal, intelligent, gentle and protective. These dogs can get bored and destructive in a confined yard without extra stimulation. They are large, cumbersome and often clumsy. They have a reputation as efficient guard dogs, but they are better suited to life as a companion. There is not much that will faze them and they need a more serious situation to respond in an aggressive manner. The Neapolitan’s success as a guard dog rests mostly on its appearance. The dog will stop and stand its ground with a stare. They also have a deep loud bark that usually warns off approaching strangers.

Compatibility with other pets Consult breeder when purchasing a puppy.

Care Requirements Neapolitan Mastiffs do salivate heavily, particularly when they are hot or after eating and drinking. If they want to come inside the house you will have to wipe their mouths and faces with a towel. They shed fur as their coat drops about once a year, but otherwise do not require special grooming. Be warned however these dogs do have a distinctive smell. The breed’s short coat means that their grooming requirements are not excessive as they have a short shiny coat. The first 12 months are the hardest as Neapolitan puppies grow very fast and can reach 40-50 kgs at six months. During this time owners must be careful with food and exercise. Don’t over exercise when young and restrict jumping or climbing. For young puppies play is enough exercise. All dogs can have free play in the backyard but must be supervised to prevent accidental injuries. The diet must be completely balanced particularly in regard to calcium. After 12 months the dogs become more low maintenance and will spend most of their time lying down and sleeping so encourage gentle exercise and activity.

Please Take Note  Medical Problems: Because of the rate of growth it is extremely important to follow the breeder’s instructions on feeding and exercise during the growth periods. Hypothyroidism, hip dysplasia, Panosteitis, Gastric torsion (bloat), "cherry eye" (prolapse of the gland of the third eyelid), heat exertion and entropian can be problems in this breed.

Ideal Owner/s A loyal family dog, the Neapolitan Mastiff is calm, steady and usually gentle with children - however the great size and weight of this breed could unintentionally injure a small child so the two must always be supervised together. Because of the size and strength of these dogs, firm training and obedience are essential. These dogs are not suitable for homes that have very small backyards. Neapolitan Mastiffs are not for the faint hearted. If you ever wanted a dog in your life you will certainly know you have one if you choose this breed. Like all big boned dog breeds, Mastiffs demand a lot of attention and care to avoid health and temperament problems. They are not a child’s dog, but are fine with families as long as the adults are in charge. A large backyard is not necessary but it may be a good idea to allow the dogs to eat and drink outside. They are mature minded, not 100% obedient and demand you get fully involved.

In Conclusion Now you know a little about the Neapolitan Mastiff and have decided this is the dog for you or you want more information, make contact with the breed club or your State controlling body for purebred dogs. They will be able to give you information about available puppies and also suggest dog shows where you can see the breed and speak to breeders. In this way you will gain a better perspective of the breed and its needs.