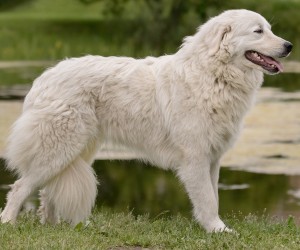 About the Maremma Sheepdog

Background Although the Maremma Sheepdog is classed as a rare breed in Australia it has been known in its native Italy for some 2000 years. The Maremma originates from two areas of central Italy; the Abruzzi, where the dog is called Postore Abruzzese and the Maremma where the dog is called Pastore Maremmano. The two breeds are almost identical to the dog we know as the Maremma Sheepdog. The main function of the dog was to guard the flocks against wild dogs. The dog was left to use his own initiative in making decisions and that sense of independence is still strong in the dogs of today. In Australia, where the Maremma Sheepdog has been used as a stock guardian, farmers have reported a 35 per cent reduction in losses from foxes, wild dogs and birds of prey.

Average Lifespan When considering a dog, please realise that you are taking it on for its lifetime. Maremma Sheepdogs live to approximately 12 years.

Breed Personality/Characteristics/Temperament The Maremma Sheepdog is typical of a livestock guardian, possessing a natural protective instinct. They are friendly and loyal to their own family but can be wary of strangers. They like children in their own family but need to be supervised when other children come to visit. Noisy or rough play could be perceived by them as a threat. They use their size and voice as a deterrent, and are not usually an aggressive dog. The Maremma will bark at anything new until it becomes part of their regular routine, which should be considered if choosing this dog as a pet in the suburbs.

Compatibility with other pets The Maremma Sheepdog gets on well with all animals be it the household cat or expensive livestock. If it is to be used as a guardian it should be introduced to its future charges as a puppy so that a strong bond will develop. Care should be taken to supervise the bonding initially, using young animals, so that the puppy doesn’t get hurt while he is still too small to protect himself. It is not advisable to leave a Maremma home alone with nothing to do; it needs something to protect.

Care Requirements The Maremma Sheepdog has a double coat which is both weather resistant and water repellent and can quite happily live outdoors. The long white coat sheds copiously twice a year and at this time needs a thorough brushing, paying particular attention behind the ears and down the back legs. At other times the coat stays remarkably clean and free from tangles. In suburbia, daily walks are a must. Maremma are very intelligent dogs and need to have a purpose in life or they become bored and destructive. These dogs love water and will happily roll over in a puddle. Socialisation as a puppy with other dogs and people is strongly recommended. Even if the dog is to be guardian in the field there will be times when it will need to be handled. Lead training and basic commands such as sit, stand and drop can be taught. Other commands, such as come, will be considered by the dog before responding. Positive reinforcement is the recommended form of training as any harshness on your part will not be forgiven.

Ideal Owner/s This breed is for owners who like something different. The Maremma Sheepdog is very independent but devoted to their families. They will not abdicate pack leadership but may allow you to be equal. Always smiling they make a good companion as well as a working dog.

In Conclusion Now you know a little about the Maremma Sheepdog and have decided this is the dog for you or you want more information, make contact with the breed club or your State controlling body for purebred dogs. They will be able to give you information about available puppies and also suggest dog shows where you can see the breed and speak to breeders. In this way you will gain a better perspective of the breed and its needs.