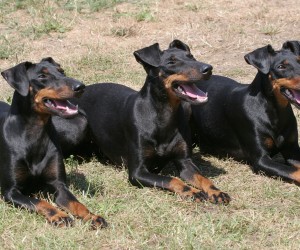 About the Manchester Terrier

Average Lifespan When considering a dog, please realise that you are taking it on for its lifetime. Manchester Terriers live from between 13 to 15 years of age.

Breed Personality/Characteristics/Temperament As it is a terrier, the Manchester should be lively and alert. However, it is also a non-sparring breed and therefore should be amicable to both humans and other dogs. A Manchester Terrier should be neither nervous nor aggressive. Although this breed can be discerning with strangers, it quickly becomes attached to its owners and is very loyal. These are active dogs which are capable of remarkable speed and agility. They are also surprisingly strong and resilient for their size. The breed has above average intelligence. Manchester Terriers make good watchdog as they readily bark to warn of potential threats. (Some individuals are prone to excessive barking and new owners should be careful to curb this problem early on).

Compatibility with Other Pets As long as appropriate early socialisation is provided, Manchester Terriers can get along with other dogs. If raised with them from a very early age, these dogs will even cohabitate with cats. However, as they were designed to hunt small vermin, this breed should not live with rabbits.

Care Requirements Coat: Needs minimal grooming - a daily brush and perhaps a polish with a sheepskin mitt or chamois leather. A bath when necessary, the short coat makes the Manchester an ideal house dog. Exercise: They need as much exercise as any small dog, love to have a real run, but are also happy to curl up inside in the most comfortable spot, especially when it is raining. Food: Manchester Terriers are easy to feed, but avoid giving them too much because they are naturally greedy.

Please Take Note This breed dislike having their feet touched, but, in spite of this, their nails must be kept trimmed. They are also wary of people they do not know, so do not expect them to be enthusiastic with visitors.

Ideal Owner/s Families with children, ideal children’s companion, but also suitable for adults living alone. As with all dogs, young children and pets should always be supervised when together.

In Conclusion Now you know a little about the Manchester Terrier and have decided this is the dog for you or you want more information, make contact with the breed club or your State controlling body for purebred dogs. They will be able to give you information about available puppies and also suggest dog shows where you can see the breed and speak to breeders. In this way you will gain a better perspective of the breed and its needs