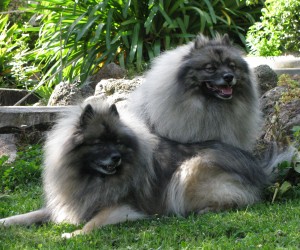 Background. The Keeshond takes his origin from the Netherlands, apart from his long and interesting history that can be traced back throughout the ages that his story is part legend but mainly fact. The Keeshond (pronounced ‘case-hond’) was best known as the "Dutch Barge Dog" or the “Smiling Dutchman."  They were used as a watchdog on the barges that carried goods which travelled through the canals and rivers of Holland.  Not only was he a watchdog on these vessels, he was the children's playmate. lt was said that the Keeshond took his name from Cornelis de Gyselaar, the Dutch Patriot leader (the people’s party) in the 1700's.  Cornelis de Gyselaar had one of these popular dogs as his constant companion during the Patriot Revolt.  Kees (pronounced ‘case’) is a short nickname for Cornelis and in Dutchthe meaning for dog is ‘hond’, so his dog become known as the Keeshond.

Average Lifespan. When considering a dog please realize that you are taking on for its life time. Keeshond live between 12 to 16 years of age.

Breed Personality/Characteristics/Temperament. Despite its Spitz heritage the Keeshond has adjusted well to warmer climates.  The Keeshond is intelligent and adaptable, an ideal companion, good watchdog, they are confident, alert, friendly always ready to learn.  They are one of the most affectionate and lovable breed of dog.

Care Requirements.  The Keeshond of his silver grey and black coat has two layers; a dense undercoat and an outer harsh coat of long straight guard hair.  The undercoat is typically shed once a year for males and females twice a year unless they have been desexed.  The double coat of the Keeshond does not require as much attention as other coated breeds but nevertheless does require regular grooming at least 2 to 3 times a week.  It is important to groom a puppy from an early age so they learn to accept and enjoy all of the attention.

Please take note that the Keeshond should never ever be clipped or shaved.  The double coat is there for a reason.  Always consult with your breeder.

Ideal Owner/s.  Adults to Children.  They will go out exercising, revel in long walks and be perfectly content to relax with you, being of eminently homely disposition and able to cope with limited exercise.