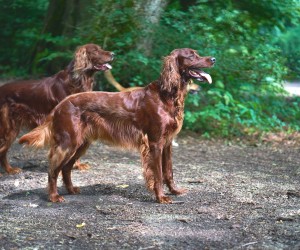 About the Irish Setter

Background The origin of the Irish Setter is not known, although it is believed that it evolved from a combination of land spaniels. These were imported to Ireland from Spain when the Spaniards helped the Irish in their rebellion against the British. It should be noted that this breed (which was established as early as 1800) was not originally a solid colour but a combination of red and white. Through selective breeding, the rich mahogany red colour we know today was derived. The Irish Red & White Setter is now recognised as a separate breed.  Irish Setters were originally used to "set" game, hence the names "setter". They found upland birds and crouched down close to their find so that the hunter could come and throw a net over dogs and birds. When firearms were introduced, this practice was discontinued, as the hunter wanted a dog that pointed, flushed game and hunted with an upright stance. Today, Irish Setters, with their keen noses and independent spirits, are still the choice of many sportsmen who enjoy going afield with a good bird dog.

Average Lifespan When considering a dog, please realise that you are taking it on for its lifetime. Irish Setters live from between 10 to 14 years of age.

Breed Personality/Characteristics/Temperament The Irish Setter is an independent but sweet natured dog with a rollicking personality and makes a wonderful, loving companion. Shyness, hostility and timidness are uncharacteristic of this beautiful breed, which is best known for its outgoing, stable temperament and strong hunting instinct.

Care Requirements Remember that this breed has a high energy level and requires regular exercise. It is essential that an Irish Setter be regularly groomed. The coat should be brushed to keep it free of dirt, burrs, snarls and mats. Brushing also stimulates production of natural oils, giving the coat that beautiful characteristic mahogany gloss. Care of feet, eyes, and ears is also important, especially after a vigorous romp in the park or field.  An Irish setter puppy requires love and firm, intelligent training. It must be persuaded to obey but never forced or abused. Provide a safe, enclosed area for daily exercise or exercise it on a leash at regular intervals during the day. Feeding a nutritious balanced diet is very important.

Please Take Note Always seek someone who is familiar with the breed to assist you when acquiring an Irish Setter puppy, and make sure you pick a pup with a happy outgoing personality.

Ideal Owner/s An active dog, the Irish setter requires a certain amount of daily exercise and attention to grooming.

In Conclusion Now you know a little about the Irish Setter and have decided this is the dog for you or you want more information, make contact with the breed club or your State controlling body for purebred dogs. They will be able to give you information about available puppies and also suggest dog shows where you can see the breed and speak to breeders. In this way you will gain a better perspective of the breed and its needs.