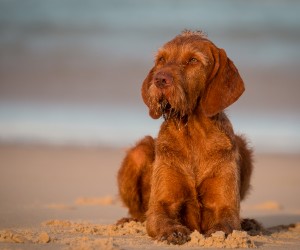 About the Hungarian Wirehaired Vizsla

Background The Hungarian Wirehaired Vizsla is the national dog of Hungary. Its early origins are hard to trace, but its history probably began in the ninth century when the warring Magyar tribes migrated from the Steppes of Asia and eventually settled in what is known today as Hungary.  For centuries the Vizsla was owned by the sporting nobility of Hungary and, before firearms were introduced in the 1700s, was used to scent and search for birds that were then either caught by falcons or netted. Subsequently a gun dog with all-round ability and that could work on fur or feather was required to work the plains of Hungary with its varying vegetation of thick crop cover, tall grasslands and cornfields. The dog needed to be fast and possess a "good nose" which would enable it to work the giant hare and to "point" the various game birds and wildfowl. The Vizsla was also used to hunt deer, wild boar and wolf, all of which it was expected to hold at bay. This was usually done using several dogs working together. A dog of above average ability was necessary and, in the Vizsla, the Hungarians had such a dog.  In the 20th Century, two World Wars and the Russian invasion of Hungary almost spelt disaster for the Vizsla. After the First World War, only about a dozen had survived, and these became the foundation of all registered Vizsla in Hungary. During the Russian occupation many nationals fled, taking their dogs with them, and so the breed became established in Europe and the West. The first Vizsla came to Australia from the UK in 1973. Today the breed is growing in strength with clubs holding field trials, shows and members outings.

Average Lifespan When considering a dog, please realise that you are taking it on for its lifetime. Hungarian Vizsla live from between 10 to 12 years of age.

Breed Personality/Characteristics/Temperament An alert household watch dog and splendid, easy-going companion, the Hungarian Vizsla learns very quickly and responds well to obedience training due to its great desire to please. Overseas it has been used as a guard dog and even as a movie star while here in Australia the Vizsla has appeared in numerous television commercials.  Being a bird dog, it loves retrieving and will, of its own accord, carry objects around in its mouth. The Vizsla is also a natural swimmer and takes to water easily, even diving to retrieve objects.  A demonstratively affectionate and lively dog, it is happiest when fully involved in family activities.

Care Requirements The breed’s short, smooth russet gold coat requires minimal grooming. The Vizsla is an active dog and needs regular exercise. Above all else, it craves human companionship.

Please Take Note This is not a dog to be left alone in the backyard as it can become destructive if bored.

Ideal Owner/s Suitable for most.  Good with children. As with all dogs, young children and pets should always be supervised when together.

In Conclusion Now you know a little about the Hungarian Vizsla and have decided this is the dog for you or you want more information, make contact with the breed club or your State controlling body for purebred dogs. They will be able to give you information about available puppies and also suggest dog shows where you can see the breed and speak to breeders. In this way you will gain a better perspective of the breed and its needs.