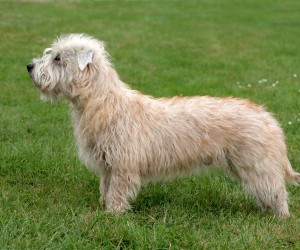 About Glen of Imaal Terrier

Background The Glen of Imaal Terrier is an Irish dog of unknown origins. It is still fairly rare. He is named for the Glen of Imaal, in County Wicklow, Ireland. The Glen was first presented publicly at an Irish dog show in 1933. Like many similarly built low-to-the-ground, powerful terriers, he was bred to hunt and kill animals living in the ground such as foxes and badgers. The dog would go into the animals den to drag it out. Glen of Imaal Terriers were even pitted in timed trials against live badgers to test their gameness until such events were banned in 1966. Unlike Lakeland Terriers and Fox Terriers, the Glen of Imaal is supposed to work silently. It may also have been used for dog fighting entertainment and to turn spits cooking meats over a fire by trotting on a treadmill for hours at a time. This spunky little terrier serves mostly as a companion dog today, but he can still catch vermin. With little training it can still be used to successfully hunt foxes and badgers.

Breed Personality/Characteristics/Temperament The Glen of Imaal is a spirited and cocky little dog. Tough and game when hunting, otherwise mild-mannered and calm indoors. They are intelligent, but also late bloomers. The breed is very brave, stubborn and rambunctious. It is patient and loyal, peaceful and gentle with the family. These excessively devoted dogs like to be near their owners and make fine family pets. They adapt well to changes of owner - so adopting an adult Glen will not be a problem. The breed is also playful and excellent with children. As with all dogs, young children and pets should always be supervised when together.  This breed has a deep bark that makes the dog sound much bigger than he is. Glens like to dig and chase. These dogs will bark if they detect danger but will rarely bark without a reason. They are sensitive to correction. Training should always be consistent with some play in every session. They respond well to obedience training and can be taught to retrieve. Glens are keen to learn, but they sometimes try to dominate and can be stubborn.

Compatibility with other pets The Glen of Imaal Terrier is feisty with other animals, though they can be trained to get along well with other dogs. Males tend to be more dog-aggressive than females, but even the males are not overly aggressive. Use caution around other non-canine pets, especially hamsters, rabbits and mice.

Care Requirements The Glen of Imaal Terrier will do okay in an apartment. They are moderately active indoors and will do okay without a yard. The Glen can sleep outdoors if the weather is not too extreme, but they would much rather be indoors with their owners. Weekly grooming - brushing or combing is required, with stripping twice yearly. Glen of Imaal Terriers have medium energy levels - usually active outside and calm inside the house. A daily walk of about half an hour is recommended.

Ideal Owner/s This breed is recommended for a first time owner only if they are willing to and capable of establishing dominance. Glen of Imaal Terriers are suitable for an apartment or small home if the exercise requirements are met. Generally good with children, but the breeds intelligence combined with its stubbornness can create problems if the dog is not disciplined.

In Conclusion Now you know a little about the Glen of Imaal Terrier and have decided this is the dog for you or you want more information, make contact with the breed club or your State controlling body for purebred dogs. They will be able to give you information about available puppies and also suggest dog shows where you can see the breed and speak to breeders. In this way you will gain a better perspective of the breed and its needs.