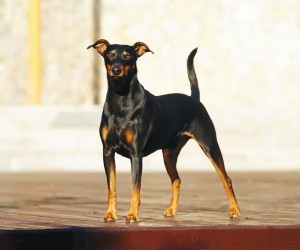 About the German Pinscher

Average Lifespan When considering a dog, please realise that you are taking it on for its lifetime. German Pinschers live for a long time. Some have been known to live up to 18 years, although the average lifespan is around 12 years.

Breed Personality/Characteristics/Temperament The German Pinscher is a very active breed. As they were originally ratters the instinct for the hunt is still very much alive. They are very sight and sound orientated. This delightful little breed is playful, loyal, watchful and fearless, and will certainly remember if they are mistreated. It is a spirited little breed that has stood the test of time, depression and war. They are brilliant with children, and a loyal family member. As with all dogs, young children and pets should always be supervised when together. A word of warning though, the German Pinscher is highly intelligent, they may take over your family before you know it if you let them. Some have even been known as pups, to take the washing off the line. If only they would fold it up and put it away!

Compatibility with other pets The German Pinscher is very happy to play with other dogs around the same size. Larger dogs tend to feel threatened by the small dog syndrome that the Pinscher displays. Cats are a no-no, and they will chase after birds too.

Care Requirements The German Pinscher is a wash and wear breed, as they have a short coat. There are very few coat and skin problems in this breed. May be subject to fly bite on the ears in summer, (use a bit of roll-on repellent) and because they have a drop ear they will need to be cleaned out about once a month with a cotton bud and baby oil.

Please Take Note German Pinschers can jump and climb. Good fencing is essential. They are also good at digging. This breed is very people orientated and when left at home alone can become destructive. Boredom can be a big problem with this breed. Socialisation is a must with people and other animals from an early age.

Ideal Owner/s A family that is prepared to spend a lot of time with their new family member; ideally an owner that will not leave his German Pinscher at home alone for long periods at a time. Elderly people may find this breed a little lively.

In Conclusion Now you know a little about the German Pinscher and have decided this is the dog for you or you want more information, make contact with the breed club or your State controlling body for purebred dogs. They will be able to give you information about available puppies and also suggest dog shows where you can see the breed and speak to breeders. In this way you will gain a better perspective of the breed and its needs.