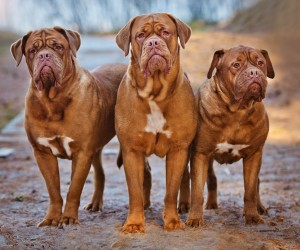 About the Dogue De Bordeaux

Background The Dogue De Bordeaux is one of the most ancient French breeds. The word "dogue" first appeared at the end of the 14th century. These now strong, proud, majestic dogs were originally used for hunting large animals such as boar, for fighting, for the guarding of houses and cattle and in the service of butchers. They were also found in the homes of French nobility. The breed, which had suffered greatly during the two world wars, to the point of being threatened with extinction after the Second World War, got off to a fresh start in the 1960s. The first of the breed imported to Australia was in the early 1990s.

Average Lifespan The average lifespan of Dogue De Bordeaux is between 8 and 10 years.

Breed Personality/Characteristics/Temperament An ancient fighting dog, the Dogue De Bordeaux is gifted for guarding, which he assumes with vigilance and great courage, but without aggressiveness. A good companion and family dog that is much attached to his master. It is affectionate, calm and balanced with a high stimulus threshold. He is very trainable, although can be quite arrogant and stubborn. It is highly recommended that the Dogue De Bordeaux receive some type of basic obedience training.

Compatibility with other pets Although the male normally has a dominant character, the Bordeaux usually gets along with other animals, especially if raised with them as a puppy.

Care Requirements Overall the Dogue De Bordeaux is an easy care breed. They have a short fine coat that requires a brush once a week and a bath once a month or when dirty. They require an average amount of exercise and love nothing more than to go for a swim or walk around the block, however it is important not to exercise in the heat of the day and always provide shade and clean drinking water.

Ideal Owner/s Families that are prepared to spend time with their Dogue and ensure that he receives at least some basic obedience training. Not a dog for the first time dog owner.

In Conclusion Now you know a little about the Dogue De Bordeaux and have decided this is the dog for you or you want more information, make contact with the breed club or your State controlling body for purebred dogs. They will be able to give you information about available puppies and also suggest dog shows where you can see the breed and speak to breeders. In this way you will gain a better perspective of the breed and its needs.