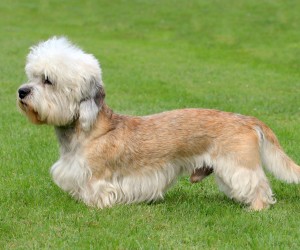 Background The Dandie Dinmont Terrier is an old Scottish breed whose origins date back to the early 18th Century. Much uncertainty exists as to the actual origins of the breed, though most agree that it shares some common ancestry with the Bedlington Terrier, Skye Terrier and Scottish Terrier. Originally owned by gypsies, these dogs were known as the Pepper and Mustard Terrier. For many years, their popularity was limited to the border country between England and Scotland where they were much prized for their hardiness, hunting prowess and amiable disposition.  It was only in the early nineteenth century that the breed acquired greater popularity, along with its rather whimsical name. Indeed, Dandie Dinmont was in fact the name of a character in Sir Walter Scott’s 1814 novel "Guy Mannering", whose pack of six Pepper and Mustard Terriers were described so vividly. It is recorded that Walter Scott was so taken with the breed, that he acquired several of them during his lifetime.

Average Lifespan When considering a dog, please realise that you are taking it on for its lifetime. Dandie Dinmont live to 10 - 14 years of age.

Breed Personality/Characteristics/Temperament The Dandie, with its tasselled ears and large soulful eyes, is a very distinctive little dog. Described as the most placid, docile and gentle of all Terriers, the Dandie Dinmont is prone neither to snapping nor yapping, and indeed has the bark of a much larger dog. This breed is more likely to reach up lightly for a pat than jump up and bowl you over.

Compatibility with other pets The Dandie on the whole has an amiable disposition toward other dogs and is not prone to initiating conflict. However, if roused he can be a fearless opponent and an excellent guard of property.

Care Requirements The Dandie does not require extensive exercise as long as it has sufficient garden to play in and is taken for walks from time to time.  While intelligent, it is not always the most obedient of dogs and will, if allowed, go about its business in a rather aloof manner.  Its coat requires some trimming and grooming, primarily to remove loose and dead hair that can cause matting, but also to retain the distinctive Dandie features, such as the silky topknot and tassels. The Dandie Dinmont does not moult, so its body coat either needs to be stripped by hand or clipped approximately 2-3 times a year. Like all dogs, its toenails need trimming regularly.

Please Take Note The Dandie is a hardy little dog, with few common ailments. However, due to having large eyes and a profuse topknot of hair, it can suffer some eye irritation if not regularly groomed and checked.

Ideal Owner/s A great little family companion, the Dandie Dinmont is exceptionally good with children, being very affectionate and gentle. As with all dogs, young children and pets should always be supervised when together.

In Conclusion Now you know a little about the Dandie Dinmont and have decided this is the dog for you or you want more information, make contact with the breed club or your State controlling body for purebred dogs. They will be able to give you information about available puppies and also suggest dog shows where you can see the breed and speak to breeders. In this way you will gain a better perspective of the breed and its needs.