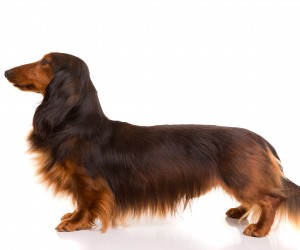 About the Dachshund (Long Haired)

Background. The origin of the Dachshund has been lost in antiquity and there is much conjecture as to its origin. It is generally accepted that the breed came to prominence in Germany where it was used by foresters and noblemen to hunt badger, fox and rabbits in dense forests where a large animal would have difficulty in pursuing its quarry. The Dachshund is a unique breed in that there are three different coats: Long, Wire and Smooth, and two sizes: Standard and Miniature - making six varieties catering for all tastes. These varieties were each developed for a specific purpose, mainly depending upon the type of terrain encountered in their district of origin. Today’s Dachshund in Australia and England is not normally used for hunting and is only bred as a faithful companion or show dog. As a result the breed differs slightly in type to that in Germany.

Average Lifespan. When considering a dog, please realise that you are taking it on for its lifetime. Dachshunds live from between 10 to 20 years of age.

Breed Personality/Characteristics/Temperament. The Dachshund is first and foremost a sporting dog, but is remarkably versatile - being equally adaptable as a house pet. The breed’s temperament and acute intelligence makes them the ideal companion for town or country. They have retained a keen hunting instinct that is quickly brought to the surface at the sight of a rabbit or fox. Each variety is different in temperament. This variety is full of character, quick in attack and defence, faithful when properly brought up and very obedient. All the senses are well developed. It has the reputation of being extraordinarily intelligent and easy to train. Its build and temperament fit it to hunt quarry both above and below the ground; its eagerness, keen sight and hearing and its sonorous bark make it especially suitable for tracking. In these respects it compares very favourably with any other variety. The thick soft hair protects it against thorns, enables it to endure both cold and heat and is rain-proof. The long haired Dachshund can therefore be used in many different ways by the sportsman.

Compatibility with other pets Excellent.

Care Requirements. Dachshund are strong, hardy and easy to care for. The long coat is the most glamorous of the three with long feathering on the ears, underline and tail, giving an appearance of elegance for those who prefer a glamorous coated animal. Dachshund get bored hanging around the yard and are enthusiastic eaters, so either ensure regular exercise or cut down on food. Dachshund are quite happy to spend their life on your favourite chair, but for the dog’s well being, regular exercise is recommended.The coat of the long haired Dachshund should be soft, straight or slightly waved and shining. It should be longer under the neck, the underparts of the body, the outer side of the ear and behind the legs. It should reach its greatest length on the tail where it should form a flag. Due to the length of coat it does require a weekly brush to keep in good condition.

Health. All Dachshund varieties have known hereditary health problems and responsible breeders will be engaged in eliminating known issues in the gene pool, however, here’s a few to watch out for; Progressive Retinal Degeneration (PRA), Laforas Disease and Intervertibral Disc Disease (IVDD).

Please Take Note Because of their long body in relation to their height, and the fact that most Dachshund love food, it is important not to overfeed. A dog that is too fat is the most likely candidate for a prolapsed disc, which is the most common problem in Dachshund and tends to occur between 5 and 7 years of age.

Ideal Owner/s Families. Dachshund are excellent with children. As with all dogs, young children and pets should always be supervised when together.

In Conclusion. Now you know a little about the Dachshund and have decided this is the dog for you or you want more information, make contact with the breed club or your State controlling body for purebred dogs. They will be able to give you information about available puppies and also suggest dog shows where you can see the breed and speak to breeders. In this way you will gain a better perspective of the breed and its needs.