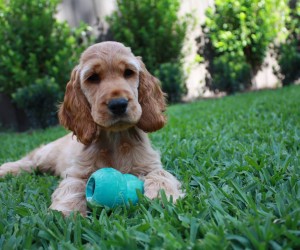 About the Cocker Spaniel

Background The Cocker Spaniel is a breed that was first mentioned 3000 years ago as existing in the Mediterranean countries. These "long eared rabbit dogs" were observed in the Roman province of Spain and it is believed they were brought to England after the Roman conquest of Britain in approximately 56 BC. They featured prominently both as working dogs and pets through the reigns of Henry VIII and the Stuart Kings, being referred to as "wood-cocking spaniels" - small dogs that could go through hedges and undergrowth to flush out the wood-cock. The beginning of the twentieth century saw the formation of the Cocker Spaniel Club of England which drew up the early standard of the breed for shooters who needed a small, active, strong dog, sturdy enough to work cheerfully and tirelessly all day flushing or driving out the game.

Average Lifespan When considering a dog, please realise that you are taking it on for its lifetime. Cocker Spaniels live from between 12 to 16 years of age.

Breed Personality/Characteristics/Temperament This fun loving, merry little dog makes a wonderful family friend and a devoted companion. It thrives on and needs the companionship of human beings.

Care Requirements Requires regular grooming and particular attention should be paid to keeping the hair trimmed away from under and around the ears, the undercarriage and the feet. The sturdy little Cocker can be housed indoors or out of doors and, providing the dog receives the love and attention it requires, it will happily settle for either situation. If kept outdoors, the dog will require a suitable shed or kennel which is warm and draught-free in winter, cool in summer and weatherproof at all times. If kept indoors, be aware that it will shed a little every day. The Cocker Spaniel is not a fussy eater and will eat almost anything. A narrow food bowl is recommended so that the long ears fall either side of the bowl and not in the food.

Please Take Note This breed is definitely not for the person who wants a dog to lock in a pen in their backyard.

Ideal Owner/s For those who understand the need for exercise and grooming.

In Conclusion Now you know a little about the Cocker Spaniel and have decided this is the dog for you or you want more information, make contact with the breed club or your State controlling body for purebred dogs. They will be able to give you information about available puppies and also suggest dog shows where you can see the breed and speak to breeders. In this way you will gain a better perspective of the breed and its needs.