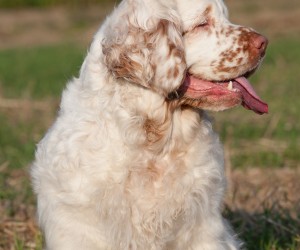 About the Clumber Spaniel

Background The Clumber Spaniel was developed by the dukes of Newcastle and their gamekeepers, primarily the Mansell family. The breed takes it modern name from the Duke of Newcastle’s Nottingham country estate of Clumber Park, which is now a National Trust property and lies in the north of the famous Sherwood Forest. The Clumber was developed to support the Dukes and gamekeepers in hunting this and nearby estates which were usually covered in heavy timber and very heavy undergrowth littered with fallen branches and limbs. The white coat ensured he could be seen in most scrub; his build ensured he could penetrate into the depths of that scrub and flush game hiding there or even retrieve shot game. The Clumber Spaniel has been recognised as a breed since at least 1788 when the breed are featured in a painting by Francis Wheatley of the founding Duke with a favoured friend, his immediate retinue and several Pointers. The breed was one of the first group recognised and offered separate classes at the first United Kingdom general dog show in 1859 and consequently enjoyed this honour throughout the world when shows began in other countries, as well as when public stud books were formed. The Clumber arrived in Australia in 1883, with the first brace coming direct from Clumber Park.

Average Lifespan When considering a dog, please realise that you are taking it on for its lifetime. The breed has a wide variation in longevity, from a couple of years through to 14 or 15. Generally you can expect a Clumber to reach ten years of age.

Breed Personality/Characteristics/Temperament As with ALL breeds the temperament is generally the result of the way the dog has been cared for and raised. Overall, the Clumber Spaniel is extremely kind, thoughtful and easy to get on with. They have a deep seated desire to please their owner and the owner’s family but cannot take the rigours of being forced trained or regimentally drilled; they need the opportunity and time to observe and assimilate how other dogs perform for their owners and will mimic this behaviour. This heritage of working in the field is translated into a little independence, particularly when tracking, but they soon check their owner’s whereabouts and will look to them for advice if the trail is clouded or lost. Their heritage as a field working dog translates into being happiest in a "pack" or kennel situation with a canine friend for company, and generally a Clumber is preferred, although they adapt well to other non-dominant breeds and so many individuals over the years have been happy in single dog families. Another consequence of their field working heritage is that they can show a little protectiveness to their owner’s things if left with them in less than familiar surroundings - a useful trait in the past if left to watch over the game recently picked up for their owner in times when poachers and thieves were quick to take the opportunity to help themselves. The Clumber, in comparison with so many breeds, is soft tempered and easily affected if the family life is not happy or if they do not receive their due care and attention twice a day; these mental scars can be borne for many years. This is a breed that, after the first adjustments, adapts well to a new home at just about any age.

Compatibility with other pets As a field working breed, the Clumber Spaniel has a natural desire to hunt fleeing or panicking small mammals or birds. Provide these types of pets with security and the Clumber will live in harmony. He loves most other breeds of dogs but is easily intimidated by the more naturally aggressive breeds; the Clumber is almost servile in his nature, and domineering dogs should not be coupled with the breed.

Care Requirements The Clumber Spaniel is one of the most low maintenance of the spaniel family. From about ten months of age they will need their feet trimmed every two months. From about twelve months of age the feathering under the ear and from the wrist to the foot on the front legs and from the hock to foot on the hind legs will also need to be trimmed every two months. This trimming can easily be accomplished by the owner, and as any child appreciates a parent combing their hair, so a Clumber appreciates the owner taking responsibility for this trimming and general coat care. Brushing should be done weekly for all Clumbers. The Clumber needs to be exercised at least twice daily and a hard, sharp free gallop is best. A fast, free moving walk on lead will maintain general tone and help to keep toenails short. A caring owner will have no trouble keeping a Clumber in peak condition and health, even if they are domiciled in suburbia.

Ideal Owner/s The Clumber is ideal for those with a little empathy with dogs, alert to a dogs’ body language and general health requirements and essentially compassionate. The ideal owner will make sure the Clumber is exercised twice daily, groomed weekly, trimmed every eight weeks - whether the owner is tired or ill or in the peak of health themselves. The ideal home will have a reasonable sized grassed backyard, with a smaller day yard set within the boundary. Parks or good walks will virtually be on the home’s doorsteps; and be inviting and interesting to the dog and to the owner. The Clumber has no problems adapting to being a housedog, but his health is best served if he can spend the days in a small outdoors yard (with appropriate bedding and shelter) and have a good romp through the whole garden under supervision. The cast white hairs of the Clumber are highly visible in most houses, so the ideal owner needs either not to be too fussed by this or a good house cleaner.

In Conclusion Now you know a little about the Clumber Spaniel and have decided this is the dog for you or you want more information, make contact with the breed club or your State controlling body for purebred dogs. They will be able to give you information about available puppies and also suggest dog shows where you can see the breed and speak to breeders. In this way you will gain a better perspective of the breed and its needs.