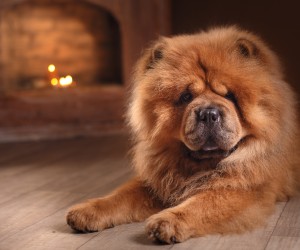 About the Chow Chow

Background.  This unique,  fascinating breed is origination in north-central Asia and is steeped in myth and mystery. DNA records indicate Chows were one of the first descendants of the predecessor of the modern day Wolf, evolving as early as 30,000 years ago.  Modern day Chows have retained their individuality and distinctive appearance since approximately 150 BC and early records indicate that the Chow was used by Chinese nobles for hunting and as guards for their palaces. The first record of the Chow in the Western world is 1781 in England, and gaining prominence a century later.  The distinctive features of this medium sized dog are its leonine appearance, blue-black tongue, scowl and stilted gait.

Average Lifespan.  The average lifespan for Chow Chows is 12-14 years of age.  Remember, a dog is your commitment for the entirety of its life.

Breed Personality/Characteristics/Temperament . The Chow Chow’s scowl is often misunderstood to be a sign of meanness, which is far from the truth. The Chow is a happy, independent and devoted dog. It does not fawn over everyone who knocks at the door; rather it saves its affection, playfulness and idiosyncrasies for its family.

Training, socialisation and compatibility.  Early and ongoing training and socialisation are key to owning a Chow, to a harmonious household and a well-balanced dog.  Chows are a dominant breed that is extremely alert intelligent and learns quickly although they may “forget” some commands they see as unnecessary (they are stubborn).  It is also an emotionally sensitive breed and if mistreated will hold a grudge.  The Chow’s instincts as a guardian and hunter are regularly displayed and it is quick to take up the chase of rabbits, cats and chickens if they haven’t grown up with them.  They are equally alert in protecting the home and family.

Care Requirements.  The Chow is ideally a part of the family and is both an indoor and outdoor dog. The thick double-coat means that in hot weather, it is best to keep it in a cool environment (e.g., inside with air conditioning).  That same coat requires regular brushing and combing to keep it looking its best. A weekly, thorough brushing and comb out will help housekeeping as the coat is shed at least two times a year.  It is essential that fresh water is accessible at all times.

In Conclusion.  For more information, please visit the Chow Club of Victoria’s website, Australia’s only Chow Club, where you can find information about Chows in Australia and Chow show schedules where you can see the breed and speak to breeders active in the breed community and the dog world in general.