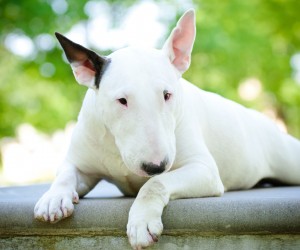 About the Bull Terrier

Background The Bull Terrier is one of the oldest terrier breeds indigenous to England. The Bull Terrier was originally bred for combat with dogs and other animals, a sport that was permissible in England in the 1800s.  Since the late 1800s the Bull Terrier has been bred as a companion dog.

Average Lifespan When considering a dog, please realise that you are taking it on for its lifetime. Bull Terriers live to 11 - 13 years of age.

Breed Personality/Characteristics/Temperament The Bull Terrier is a combination of balanced power, grace and agility. It desires human companionship and its character and individuality win it lifelong friends. It is very devoted to its family.  The Bull Terrier has an innate sense of humour, brains, imagination, and personality.  A Bull Terrier is very active, playful, clownish, witty, silly, humorous, stubborn and conniving.  All puppies are extremely “busy” and many Bull Terriers remain active and playful until middle age (5-6 years). A Bull Terrier fits well into active families where it receives a great deal of companionship and supervision. A Bull Terrier will not do well in a situation where it is expected to remain alone in the home or yard for long periods of time, or where its physical activity is very restricted.

Compatibility with other pets Many Bull Terriers can and do enjoy the company of other dogs - with certain exceptions. Male Bull Terriers which have not been desexed do not as a rule get along with other male dogs. A male and female Bull Terrier can live together quite happily, and two females can often share the same home.  Care must be taken that jealousies do not arise, altercations can be serious. Raised from a puppy with cats and other animals they can have a companionable co-existence.  Bull Terriers should never be let off lead in parks or with unfamiliar dogs.  Many Bull Terrier lines have a high prey drive and care must be taken around any animals that may perceived as vermin or prey.

Care Requirements A Bull Terrier sheds all year round, and some people are irritated by the course hairs.  Bull Terriers are natural sun-bakers and care should be taken that they are protected from the sun.  A Bull Terrier requires a securely fenced, average to large sized backyard and it will take exception to being chained or tied up. The breed requires a considerable amount of human companionship.

Please Take Note Although generally healthy, Bull Terriers can be prone to skin allergies, particularly those caused by insect bites. Pups should be checked for deafness.

In Conclusion Now you know a little about the Bull Terrier and have decided this is the dog for you or you want more information, make contact with the breed club or your State controlling body for purebred dogs. They will be able to give you information about available puppies and also suggest dog shows where you can see the breed and speak to breeders. In this way you will gain a better perspective of the breed and its needs.