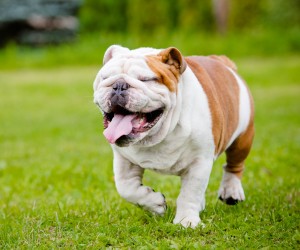 About the British Bulldog

Background Bulldogs – a breed developed from Mastiffs and which acquired their name around 1630 – were also used to bait bears and badgers. The tremendous upswept jaw, with a broad nose set back almost between the eyes, was developed so that the Bulldog could breathe while it was hanging on the neck of its unfortunate opponent. Horrifying accounts relate the animal’s courage and tenacity in the bull ring. Originally bred for the cruel ‘sport’ of bull baiting, which was popular in England for over 700 years before it was made illegal in 1850, today’s Bulldog is a far cry form its earlier progenitor. It is more heavily built and less athletic than those dogs which were subjected to the ‘sport’ of tormenting bulls in a ring, by unscrupulous, blood-thirsty men whose aim was to terrify the bull as to get its adrenaline rising, which would tenderise its meat for slaughter.

Average lifespan When considering a dog, please realise that you are taking it on for its lifetime. Bulldogs live from between 9 to 10 years of age.

Breed personality/characteristics/temperament The British Bulldog is usually very placid and gentle, but can be jealously territorial around that which it regards as ‘its own’. Its appearance, rather than its temperament, is its only asset if looking for a ‘watchdog’, but it certainly has courage when called upon to defend its property. Its burly figure and massive head and jaw would undoubtedly deter any marauder. The Bulldog enjoys the company of its owner and displays a loving nature at every available opportunity. It is stoic to a fault. As with all animals, training and kind discipline should begin at eight weeks if a puppy is not discouraged when it jumps up on its owner, it will not be its fault if it is a nuisance later on. It is primarily as a family pet that the Bulldog scores well and it will repay you with many years of devotion and good health in return for your care and companionship.

Compatibility with other pets Most will be amenable with other dogs, but there are individuals within the breed that do not care to share their home comforts with other species! It would be advisable to introduce any bulldog to cats at an early age.

Care requirements It is recommended that would-be purchasers learn a little about the breed before purchasing. A smooth-coated breed, the British Bulldog is generally a clean animal. Folds in its face need to be cleaned daily by drying them out with cotton wool, applying Vaseline, and then wiping it out to create a barrier against tear stains and to prevent chafing. The area underneath the root of the tail requires the same attention. A little Vaseline smeared over (and left on) the nose daily prevents it becoming crusty. Toenails (especially the dewclaws) should be inspected weekly to ensure they have not become too long and require clipping. Daily brushing for around five minutes plus a wipe over with a damp flannel should keep your dog looking and feeling in top condition. Cooked bones should never be given nor any small bones that could become caught in the throat. Fresh clean water should be available at all times. A daily walk around the block should suffice for exercise, preferably early in the morning or late in the evening. These dogs do not enjoy getting overheated and great care should be taken to ensure that they are in a comfortable atmosphere at all times.

Please take note Agitation, particularly during hot weather, can prove fatal. The build of this breed determines that it is not a dog to be vigorously exercised, but nevertheless should always be maintained in top muscular tone.

Ideal owner/s Recommended for all those both sensible and sensitive to the needs of this breed. Very young children would need to be taught to respect the animal and its requirements. It is not suitable for exercising by anyone of a frail build as the breed can be quite rambunctious.

In Conclusion Now you know a little about the British Bulldog  and have decided this is the dog for you or you want more information, make contact with the breed club or your state controlling body for purebred dogs.  They will be able to give you information about available puppies and also suggest dog shows where you can see the breed and speak to breeders.  In this way you will gain a better perspective of the breed and its needs