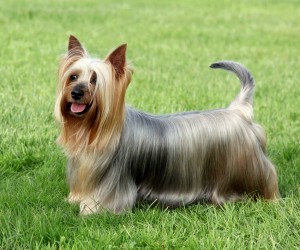 Average Lifespan When considering a dog, please realise that you are taking it on for its lifetime. Silky Terriers live to 12 - 15 years of age.

Breed Personality/Characteristics/Temperament The Australian Silky Terrier is friendly to all the family but will usually attach itself to one member and be friendly with the rest. It will tolerate strangers but no more than that. It will love children if raised with them, but it doesn’t enjoy being fussed over or being treated like an animated toy and prefers to be treated as an equal. As with all dogs, young children and pets should always be supervised when together.
The Silky is classified as a "toy" dog because of its size, but it is far removed from the usual lap dog; it has the true smart and forceful character of a terrier. It has all the advantages of a small dog in suburban life, not being too big for the children, the car or the garden, and will not break ornaments with one sweep of the tail or cost a fortune to feed. Obviously bred as a household dog, it is just as much at home in the country protecting the homestead from snakes and rats with all the tenacity and zest of its terrier forebears.
The Silky is a mixture of temperament traits, taking after the Australians who bred it; it is friendly but independent and well able to look after itself when in strife.

Compatibility with other pets Your Silky needs to be introduced to other pets at an early age. Remember this is a terrier breed.

Care Requirements Like most long coated dogs, the Silky loves being groomed, provided this procedure is started at a very early age. The amount of grooming required is dependent on the actual length of coat your Silky has inherited.
A Silky does not require a great deal of exercise, however, although being full of stamina and tremendous energy, it will love running in the fields or going for long walks on the end of a lead.
Its bed is its kingdom, be it a cardboard box or fancy basket. All small dogs should be allowed to sleep inside, so set the bed in a place that will be suitable to you and your Silky.

Please Take Note The Silky is not suited to being an outdoor dog.

Ideal Owner/s Those who require a family companion and are prepared to have a dog living indoors.

In Conclusion Now you know a little about the Australian Silky Terrier and have decided this is the dog for you or you want more information, make contact with the breed club or your State controlling body for purebred dogs. They will be able to give you information about available puppies and also suggest dog shows where you can see the breed and speak to breeders. In this way you will gain a better perspective of the breed and its needs.