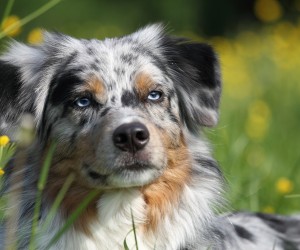 About the Australian Shepherd

Background The Australian Shepherd was actually developed in America and there are many debates over the origins of the foundation stock. It is believed dogs travelled over with flocks of Merino sheep and the Basque shepherds who tended them. Some contend they came to Australia from Spain when the first Merino sheep arrived, and then travelled on to America. Others believe they were Australian Sheepdogs derived from the Smithfield and some type of Collie - possibly the German Coolie or its ancestor. The name came about because of the perceived link with this country and the herding of Australian Merino sheep. Once in America, Aussies were used to work sheep and later cattle, developing quite a reputation as a top working dog. Legend has it that these dogs were held in reverence by the Indians because of their unusual and often blue eyes - which led to them being referred to as the "ghost-eyed ones". As such, these sacred "spirit" dogs and their owners remained unharmed by the Indians.  Documentation of the breed’s early history in America is scant, however Australian Shepherds were fully recognised by the American Kennel Club in 1993. In Australia the breed is in its infancy, only having been introduced in 1990. Australian Shepherds were fully recognised by the Australian National Kennel Council on the 1st January 1994. Since then the Aussie has gained considerably in popularity, competing successfully in conformation, obedience and agility.

Average Lifespan When considering a dog, please realise that you are taking it on for its lifetime.  Australian Shepherds live to 12 - 15 years of age.

Breed Personality/Characteristics/Temperament The Australian Shepherd is good-natured with an even disposition. It may be somewhat reserved when meeting people for the first time but there should never be any display of shyness or aggression. This breed is primarily a working dog with strong herding and guarding instincts. It is very agile and works with style and enthusiasm. Although not couch potatoes, some are quite content to be lap dogs. Extremely intelligent and devoted to their families, Aussies are quick to learn and very easy to train. While Australian Shepherds are known for their ability in obedience, agility, tracking and endurance, they have also performed creditably as service, police and drug detection dogs. In addition to successfully herding both cattle and sheep, they have undertaken search and rescue missions, as well as working as therapy dogs for the sick and elderly. The Aussie is truly one of the most versatile breeds.

Compatibility with other pets Reserved but good with animals they grow up with.

Care Requirements A huge yard is not required for this breed but daily exercise is a must.

Please Take Note "Grinning" is a characteristic of some Australian Shepherds, and is not to be mistaken for snarling.

Ideal Owner/s The Australian Shepherd is perfect for the person wishing for a highly trainable dog. If you have the time and commitment to take on an Aussie, you will not be disappointed as they are special dogs who deserve special owners.

In Conclusion Now you know a little about the Australian Shepherd and have decided this is the dog for you or you want more information, make contact with the breed club or your State controlling body for purebred dogs. They will be able to give you information about available puppies and also suggest dog shows where you can see the breed and speak to breeders. In this way you will gain a better perspective of the breed and its needs.