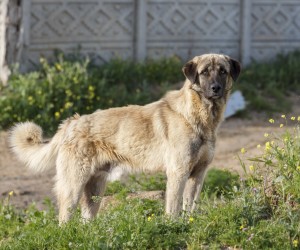 About the Anatolian Shepherd Dog

Background A shepherd’s guard dog of ancient lineage, the Anatolian Shepherd Dog is believed to have descended from large hunting dogs in Mesopotamia. Its original home of Anatolia in Turkey is characterised by extreme heat and cold, depending on the season. Historically, in Turkey, breeding of the livestock guardian dogs has been dependent on selection and survival of only the most successful of the available working dogs. Those dogs that were able to cope with the elements, travel long distances while guarding flocks on the Central Anatolian Plateau. Like a giant puppy, the Anatolian does have a strong bonding or "family unit" drive. It bonds possessively and protectively with animals or people that it is raised with and will loyally guard all that it considers part of its domain.

Average Lifespan They have an average lifespan of 12-15 years.

Breed Personality/Characteristics/Temperament The Anatolian Shepherd is a large, rugged and impressive. These dogs mature quite slowly, reaching full adulthood at about four years old.  They possess great endurance and agility, are active and hard-working breed but are first and foremost a guarding breed. They are naturally independent, very intelligent and tractable. They are loyal and can be fiercely possessive and protective of his family, stock and territory. The Anatolian is also a bold, confident dog that does not become overstimulated easily. The Anatolian Shepherd quickly learns what is normal daily activity. They are generally curious but aloof with guests. They are not outgoing dogs that want to make friends with everyone and dislike strangers who are too forward. They are calm and observant of their surroundings and may not go looking for trouble, but he may not back down if challenged. An Anatolian that has been agitated may be too angry to be controlled and cannot be stopped on command.

Care Requirements Anatolians have a dense double coat, a short or medium long coat that is easy to care for and requires little grooming. Hard textured enough to shed dirt but it does not tend to matt or tangle. The coat needs a thorough brushing-out during the twice yearly shedding season. You can get away with little attention the rest of the year.  This breed needs a lot of exercise. They do best when they can run free in their own fenced-in yard. In this care they will decide upon their own exercise needs.

Ideal Owner/s The Anatolian Shepherd is relatively inactive indoors and will do best at least with at least a large yard.  This breed is very suspicious of strangers and it is therefore necessary to provide a secure, fenced yard.

In Conclusion Now you know a little about the Anatolian Shepherd and have decided this is the dog for you or you want more information, make contact with the breed club or your State controlling body for purebred dogs. They will be able to give you information about available puppies and also suggest dog shows where you can see the breed and speak to breeders. In this way you will gain a better perspective of the breed and its needs. Anatolian Shepherd Dog Club