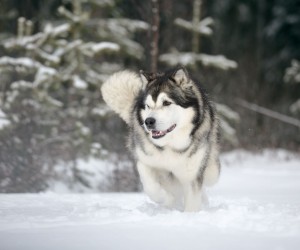 The Alaskan Malamute was first recognised as a pure breed by the American Kennel Club in 1935. Despite this relatively recent recognition, he is one of the oldest Arctic sled dogs. He was the native dog of the nomadic Inuit people of the Arctic regions and was used as both a sledge dog and a hunting dog. In the extremely harsh Arctic conditions where food was often scarce, it was rare for a family to own more than one dog, but common for the dogs of a village to be worked together.

When considering a dog, please realise that you are taking it on for its lifetime.

The Alaskan Malamute is an affectionate, friendly dog, not a “one man” dog. He is a loyal, devoted companion, playful on invitation, but generally impressive by his dignity after maturity. The average Malamute does not make a good guard dog, as he is more likely to welcome an intruder with open arms, a cup of coffee and the safe combination, rather than warn you of one! But this friendliness often does not extend to other animals, as small, fast moving animals are often mistaken as prey and, unless extensively socialised as a young dog, it is unlikely he will be tolerant of another dog of the same sex.

The Alaskan Malamute is a large, strong and sometimes exuberant breed. He has pricked ears, a curled tail and a double, standoff coat. His strongly entrenched survival instincts include hunting, digging, being competitive with other dogs, eating just about anything and pulling very hard on a lead. The usual colours range from light grey through intermediate shadings to black, sable and shadings of sable to red. The only solid colour is white.

The Malamute’s double coat acts as his insulation, just like the insulation in your roof, so the coat should never be shaved or clipped in summer. Malamutes need surprisingly little grooming, except when they are dropping their coat (usually once a year for males and twice a year for females). The Malamute is a breed that needs little or no washing if the coat is in healthy condition. A regular brushing should be sufficient to keep most Malamutes clean and free of odours, however during shedding of the undercoat they need daily brushing and grooming with an undercoat rake to remove the loose hair. The coat drop acts as their “spring cleaning” and within a few weeks the new, clean undercoat grows back.

All breeds have individual health issues. When speaking to breeders in is recommended you enquire about breed’s health and what health testing the breeder does. The Malamute is generally a healthy breed, however health conditions do occur occasionally. These may include Hip Dysplasia (HD), Chrondodysplasia (dwarfism), Day Blindness (also known as Cone Degeneration), Cataracts, Hypothyroidism, Epilepsy and Gastric Torsion & Dilation (Bloat).

The Alaskan Malamute can be a challenge to own and is not suitable for everyone. Being a working dog, owners must be prepared to spend plenty of time exercising their Malamute. They do best within a family environment when included in family life, and do not do well left as a single dog, alone in a backyard.

Now you know a little more about this breed. If you have decided this is the dog for you and wish to investigate further, please contact the Breed Club or Dogs Victoria. They will be able to give you information about available puppies and also suggest dog events where you can see the breed and speak to breeders. In this way you will gain a better perspective of the breed and its needs. With any breed of dog, it is important to research and determine suitability for your lifestyle before committing to a puppy which will be a part of your family for many years to come.

Whilst many breeds are recommended for families, it is imperative that when children are with dogs they are supervised at all times. Basic obedience training is a vital part of dog ownership.

Dogs Victoria is about the responsible ownership of all dogs and in particular the preservation of pure breeds.